At the tender age of 64 I decided that I’d like to own a bicycle - never having had one, even throughout all my childhood - and so I bought a reasonably good-looking machine on Gumtree, without having the slightest technical knowledge of gears, frames, tyres etc.

The bike lay unused for some time before a friend persuaded me to actually get out and ride the thing, and fairly quickly my interest was piqued, sufficiently in fact to be motivated to purchase a brand-new machine with improved gearing and disc brakes. Although I was sticking to very gentle cycle paths, and strictly only ever venturing out in excellent weather, I managed to get a few decent rides in before winter set in and the bike was laid up for some months.

Fast forward to April 2020 and a couple of weeks into the newly imposed lockdown, I decided this was the perfect opportunity to get out and about on (relatively) quiet roads - and fortunately enough, with very favourable conditions - even though I was now cycling on my own. I extended my range gradually, building up to 50-60k and some months into the year, when restrictions had eased a little, I was able to join my former cycling pal and explore some of the dedicated cycle paths of Northern Ireland.

The pair of us teamed up with another duo of like-minded cyclists and, even though I believed it would be beyond my capabilities, we would fairly regularly take to the less busy roads of Islandmagee (Antrim) to tackle some of the rather demanding hills and terrain of the island. We have also done a few all-day rides further afield and it’s hard to credit that I have cycled over 1,000 kilometres this year alone.

Although my mates are all approximately ten years younger, stronger and fitter than me, I’m pleased that I can mostly keep pace with them, despite having to make amends for, and overcome, many, many years of sedentary indolence.

I can only congratulate AXA and Cycling Ireland for initiating the Community Bike Rides scheme, which has changed my attitude to obtaining exercise; by first, establishing a customisable, planned schedule for folk such as myself to sign up to, ensuring some commitment to a regime of sorts; and second, by offering an incentive to set achievable goals and gain commensurate rewards. Previously I had only made impromptu decisions to go for a ride, always based on at least a benign, if not sunny, pleasant forecast, whereas I am now much less pernickety and will head out regardless, except for rain (not good for one who must wear specs!), strong winds or icy roads.

I am fortunate to be retired and unencumbered by any duty to work of any sort, unlike my chums who are still in either full-time or part-time employment, so I am once again becoming used to my solo rides, and that does permit me to dictate the pace, range and degree of difficulty of each outing, through which I hope to see improvements in all those aspects as I get more miles clocked up. I have lobbied the lads and I do look forward to them all signing up to AXA Community Bike Rides soon and being able to take part in some group rides in this neck of the woods sometime post-Covid, 2021.

So, thanks to the AXA Community Bike Rides Team for giving me that impetus to get out there and exercise in the fresh air, with all the physical and mental health benefits it undoubtedly provides. I wish I’d become aware of the scheme much sooner!

My current favourite route is a 10km from my house that takes a gentle run, mostly flat or downhill - albeit with a couple of short, sharp inclines to begin with - on the Ballymullock Road for a few kms, before peeling left onto the Sallagh Road, which is much quieter, winding and rising for a few kms to meet the Ballycoose Road that offers a very steady, almost 2km climb up to the cleft in the hills on either side, and the viewpoint summit and carpark known locally as ‘The Headless Cross’.

View from 'the Headless Cross'.

I like this run for the spectacular scenery, with the crescent of steep cliffs called ‘The Sallagh Braes’ ahead, and on your left as you negotiate the twists and turns of the Sallagh Road, passing a small glen used as a location in the TV series ‘The Game of Thrones’, before you see the imposing Scawt Hill in front, and turning left for the next ascent, you can’t fail to be impressed by the commanding bluff of Robin Young’s Hill to the left of the gradient, plus the rewarding panoramic view to be had from the top, over Cairncastle and Ballygalley Head out to the Maiden Rocks in the North Channel and the Scottish coast beyond. 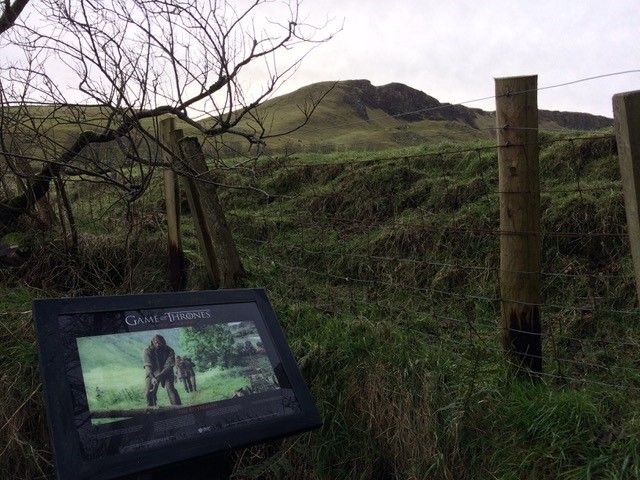 Setting for Game of Thrones.

I should probably reassert that I am not what I would recognise as a ‘proper’ cyclist, being merely an old bloke who has recently rediscovered exercise in a form that not only permits elements of lung-busting, heart pounding exertion, but also carefree freewheeling respite. That, and the very simple pleasure of exploring countryside both far and near that I thought I knew very well, but which I now realise can only be truly appreciated viewed from a bicycled perspective.

Why not get out on your bike and see what you can discover in your area? Take part in upcoming rides.