American born to Irish parents, Sheila O’Brien moved to Ireland in 1997 from Boston Massachusetts. She lives in Cavan with her partner Darren and has 4 children and 3 grandchildren. A health care worker by trade, she works as a care assistant in her community. Now almost 52, this mother and grandmother describes herself as “overweight, with a dodgy knee and a degenerative disc disease” …yet she can cycle.

In May 2019, she decided it was time to get a bike, and was able to purchase one through the bike2work scheme – this allows a person to pay for a bike over a 12mth period through their salary, so you don’t have to come up with the money all at once.

Not knowing much about cycling, Sheila purchased a hybrid and her cycling journey began…with an occasional trip to Crover House Hotel for a ‘light refreshment’! Over the following few months, the bike became more of an ornament, as although Sheila wanted to cycle, finding the motivation was difficult.

In December 2019, Sheila came across a Facebook advert promoting AXA Community Bike Rides. “When I saw it, it didn’t make me feel like I needed to be super fit or need a flashy bike…it looked like something I could be a part of and although I was overweight, the advert didn’t intimidate me, which can often be the reason for not taking part in something”.

Sheila had spotted an AXA Community Bike Ride which was being led by Noel Garrahan, a local volunteer leader in Cavan. Noel is a member of the Sheelin Flyers Cycling Club and had got involved in the programme to support people to get back on their bikes in his area. And so Sheila began registering online and taking part in his group rides. “I love to meet people. Although I’m usually at the back of the group, there’s never any pressure put on me and Noel and the support leaders are so encouraging. I learned loads in those first few group rides; how to change my gears; how to ride safely on the road and they just helped me build my confidence”.

January 2020 brought bad weather and lots of it, and a number of group rides had to be cancelled. This was also the month that brought devasting news to Sheila’s door, as her younger sister Tara (48) living in Boston, was diagnosed with motor-neurone disease (or ALS as it’s known in America). “This was a really difficult time. I became a bit disillusioned with things, and before I knew it, Covid hit and whatever bit of cycling I was doing came to a stop, as no group rides could take place”

In May, as restrictions were eased, solo bike rides were introduced and for Sheila, “they couldn’t have come at a better time. These rides pushed me to get out. I love registering and getting a reminder email, as this keeps me accountable”. Signing up to take part provided the motivation Sheila needed to get back out cycling. “Tara can’t cycle, but I can. We often take our bodies for granted. When I’m on my bike I’m always thinking of her as she fights her battle”.

With a mix of easy going and challenging solo bike rides on offer, Sheila was able to pick the rides that best suited her depending on her workload and how much time she had to spare. “Cycling takes me further than my feet…I’ve been able to explore way more of my local countryside and I always come home in a good mood”. With the opportunity to participate in solo rides four times a week, Sheila began clocking up the bike rides. “I love to see how many rides I’ve done and it’s great to get the rewards…you feel like you’ve earned something”.

Cycling has provided Sheila with the opportunity to support her sister Tara in raising money for research into a cure for motor-neurone disease/ALS. Sheila has created fundraisers through cycling to support the 4youIwillfight campaign.

She’s lost 16lbs in the process. “When I started my goal was to try and get all three rewards (buff, waterbottle, t-shirt), but I had no idea where it would take me. I hope people can see how accessible these rides are and more people take part, as I wish people could feel like I feel!!”

During the spring, Sheila contracted the coronavirus. “My doctor said because I was fitter and in better health than I had been a year previously, I possibly recovered much quicker from the virus. You really never know what the outcome will be of that first step…turning up last December to take part in an AXA Community Bike Ride has had a massive effect on my life.” Sheila is now keen to get trained up as a Ride Leader, so she can bring like-minded people on bike rides in her area.

The AXA Community Bike Rides team would like to acknowledge that several others have also recently completed the 100 rides and congratulate Charlie Parsons (Kilkenny) on being the first member to hit the milestone.

Why not join Sheila, Charlie and all the other members who are currently enjoying the benefits of participating in the programme – register on an upcoming ride today! 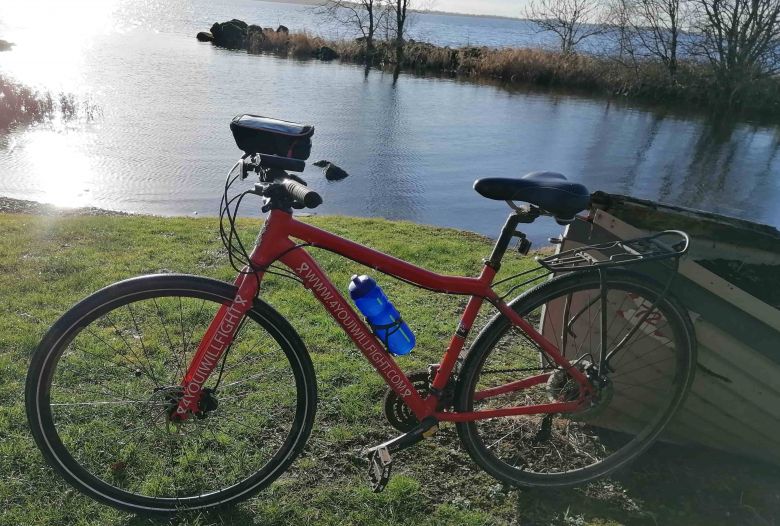